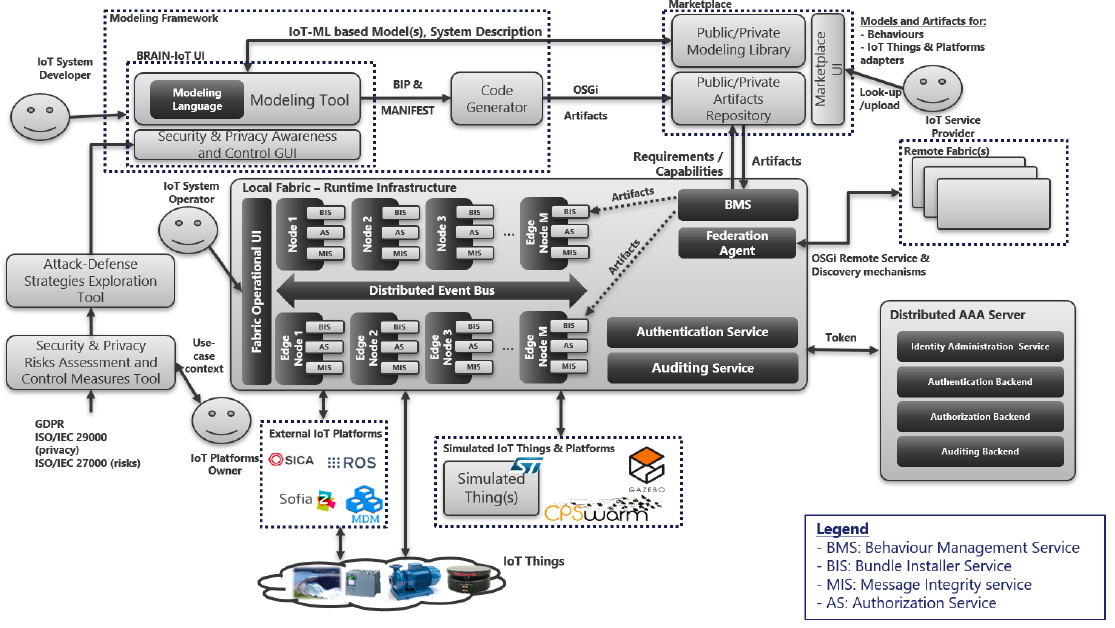 Internet of Things (IoT) products and services are being widely deployed in all professional and mass-market usage scenarios despite the high cost of required investment in IoT infrastructure. The economist reports by the end of 2016, the primary concern of 29 % of surveyed companies is related to the cost of the IoT deployment followed by concerns about security and privacy, cited by 26%. Meanwhile, when it comes to using the IoT to measure and manage internal operations, the infrastructure sector, which includes transport, logistics and telecommunications, fares best, since they found a good compromise between investment and revenues. Also, a lack of skills about the technology was hampering the spread use of IoT. These issues are covered by Brain-IoT project such as machine learning integration within collaborative IoT platforms, quality insurance, security, safety and, privacy.

The project involves multiple European partners from academia to industry. UGA as one of the academic partners provides the reference architecture to the project by highlighting the different partner’s capabilities. The blueprint is to split the architecture on three views that figure out all the required technologies, starting from modeling in UML/IoT-ML until the deployment onto the dedicated Brain-IoT execution platform called “Brain-IoT Service Fabric”. At a high level of specification, the IoT system captured in UML/IoT-ML is translated into BIP to take advantages of the developed tools related to analysis and verification.

UGA, as an academic partner, developed a statistical model checking tool that checks if the BIP model satisfies requirements expressed in the form of temporal logic. Also, UGA proposes a BIP grammar support, syntax checker and JAVA code generator based on Eclipse plugins. The generated code implements the so-called “smart behavior” and it could be simulated independently to the technology related to the target platform. Meanwhile, the required artifacts have to be wrapped within bundles following the OSGi enRoute pattern; thus, they could interact with each other through a publish-subscribe mechanism called “Event-Bus”. The platform also offers the ability to communicate by using REST-API with the external world represented by devices (i.e. actuators and sensors) and remote IoT platforms. Some features that are supported are related to behavior adaptation and device discovery. When a new device is discovered, then the platform is able to load the new “smart behavior” from a Marketplace (i.e. bundles repository) according to the device characteristics. Crosscutting concerns related to access management and security (i.e. access control, securing protocol) are also handled. 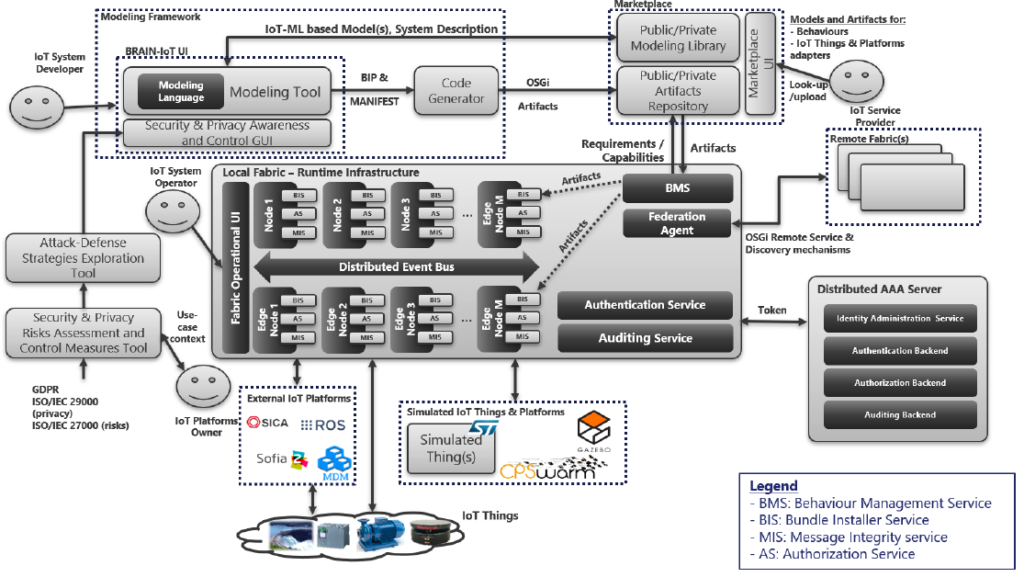 This article provides an overview of the current state of IoT reference architecture that is proposed to be applied to any IoT-architecture. It does not mean that any IoT solutions shall implement all the listed features.  It mainly depends on the function/Nonfunctional requirements that the architecture has to cover.

BRAIN-IoT co-authors a book chapter on IoT and Security